The September 1864 Civil War Battle of Sulphur Trestle, in Limestone County, cut a crucial Union supply line and was a victory for the Confederate forces under Gen. Nathan Bedford Forrest. The engagement over the railroad bridge was the bloodiest to take place in north Alabama.

By 1864, Union forces had advanced deep into Confederate territory, even into Alabama. The food, ammunition, clothes, and weapons required to continue their campaigns were transported primarily via railroads to troops fighting the war. One of these, the Alabama and Tennessee Railroad, ran south from Nashville, Tennessee, through southern Tennessee and northern Alabama to Decatur, Morgan County, on the banks of the Tennessee River. From Decatur, the railroad connected with another line that extended east to Chattanooga. This line thus provided a continuous route for supplies that were offloaded from boats on the Cumberland River in Nashville and then sent via train to support Union forces in Chattanooga. Nathan Bedford Forrest.

To protect this vital supply line, Union forces constructed forts at strategic points along the length of the railroad. Sulphur Trestle Fort was constructed by the Ninth and Tenth Indiana Cavalries on a gently sloping hill alongside the railroad tracks about one mile south of the town of Elkmont, Limestone County. (The Ninth was commanded by Eli Lilly who later founded the pharmaceutical company that bears his name.) This rudimentary fort was a square of 300-foot earthen embankments fortified with two wooden blockhouses. The fort was protected by steep ravines on three sides and overlooked an open clearing to the south, providing an exposed field of fire on advancing enemy troops. The fort, however, had a fatal flaw: for some reason, it had been located below the summit of adjacent hills. 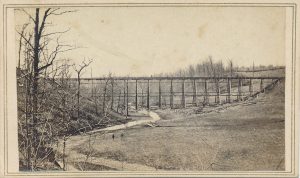 Although small, the fort was important because it defended a vulnerable section of the railroad line, a wooden trestle, 300 feet long and 72 feet high, that spanned a broad valley bisected by narrow Sulphur Creek. The trestle was an inviting target for Confederate soldiers seeking to disrupt this prime supply line.

On Saturday, September 24, 1864, Confederate general Nathan Bedford Forrest’s troops, about 500 mounted cavalry and infantry, who had just enjoyed a victory over a much larger force of Union troops in the town of Athens in Limestone County, six miles south of Sulphur Creek, advanced north with the intent of destroying the trestle. Confederate scouts engaged in a brief skirmish with a Union patrol late on Saturday evening, and the Union forces withdrew into the fort’s perimeters; the opposing sides exchanged gunfire sporadically throughout the night. Forrest’s troops were in position and ready for battle before dawn the next day. In the early hours of Sunday morning, September 25, Forrest’s artillery opened fire against the earthen works.

The approximately 1,000 Union troops garrisoning the fort returned fire, but they had only two 12-pound artillery pieces versus Forrest’s eight cannon. Although the Union defenders had the advantage of a fortified position, Confederate artillery and sharpshooters were able to fire down on the Union troops from the higher ground surrounding the fort. From their superior positions, Forrest’s artillery reportedly poured 800 rounds into the fort in a little more than two hours. Union troops tried to take cover in the fortification’s buildings, but the artillery fire either destroyed the structures or set them afire.

About mid-morning, a brigade of troops under the command of Col. David Campbell Kelley charged across the open field on the valley floor, losing a number of soldiers in this advance. Unable to breach the fort’s defenses, they took up positions in a ravine within 100 yards of the fort. From there they fired continually at the defenders. The tide was clearly in the Confederates’ favor. The cannon fire and the deadly accuracy of Confederate sharpshooters had decimated the Union ranks.

Around noon, Forrest demanded immediate and unconditional surrender, and Col. John B. Minnis, who had assumed command after the commanding officer, Col. William Hopkins Lathrop, was killed, complied. The Confederates took control of the fort and set the blockhouses and the trestle bridge afire, burning them to the ground. The battle, which had lasted about five hours, proved costly for the Union: the Confederate’s had severed the vital supply line, and 200 Union troops were killed, with the remaining 800 taken prisoner. About 40 Confederate soldiers were lost. Forrest catalogued his captures as 700 small arms, 16 wagons, 300 cavalry horses and equipments, and medical, quartermaster, and commissary stores. The battle was north Alabama’s bloodiest of the Civil War and participants attested to the awful carnage suffered by the Union. Although the loss of the trestle affected the Union Southern Campaign, it did not affect the overall war effort. 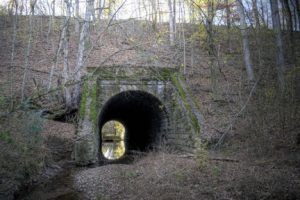 The gap that the trestle spanned was later filled in with dirt, and the railroad bed is now part of a hiking trail as part of the of the “Richard Martin Rails to Trails”.  The site is located about 1.5 miles below Elkmont, AL.