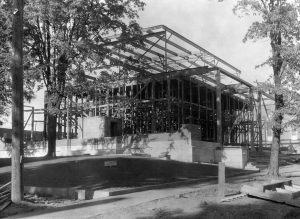 It was April, 1930, and the country was still reeling from the aftermath of Black Tuesday, when a mayor and a postmaster from a little Southern town arrived in Washington to plead for a new post office building.

Athens Postmaster C.M. Hillis and Mayor C.W. Sarver made the rounds, explaining why their rapidly growing town needed the building, but in the throes of the Great Depression, funds were few and far between.

In August 1932, Congressman Ed B Almon for the eighth district after several times, Congress finally approved a bill approving the erection of the Athens Federal Building for a new post office for the amount of $58,170.00.  The United States Postal Service purchased the site for a building at the northeast corner of West Washington and South Madison Streets for $6,500. El Dorado, Arkansas, W. B. Smith submitted the lowest bid for $58,170.00. Mr. Smith used as much local help as possible. He contracted with Herbert Eubank for the removing the buildings from the old Russell lot and also for the excavation for foundations and basement. The site of the old Post Office was formerly of the old home place of the late John M. Russell, just west of the Cumberland Presbyterian Church at the corner of West Washington and Marion Streets, one of the ideal locations in the city.

The Neo-Classical Revival style building was designed by Britt Alderman of Atlanta, Georgia. The building is of stone, brick, granite, and Marble adorned with eight large columns with the cutting of the Dogwood Bloom.  The front stressing the Southern Colonial type of architecture.  After several delays not caused by the contractor the building opened its door Tuesday morning November 14, 1933 the total amount was $59,195.25. Athens’ handsome new post office building was formally dedicated with appropriate exercises at 7:30 o’clock Monday night, Congressman A. H. Carmichael being the guest of honor of the occasion.  City Attorney Edward Goodrich, representing Mayor R. H. Richardson, Jr, made formal dedication in a short address.  The dedication exercises included a memorial service to the late Congressman Ed. B. Almon on December 18, 1933. 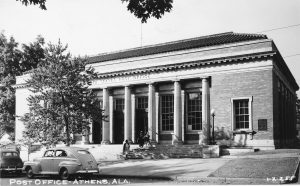 By the end of the 1970s, the U.S. Postal Service had decided to build the more modern building that still serves the community at the corner of Market and Hine Streets. On December 4, 1978, the County Commission issued a contract with U.S. Postal Department to obtain title to the old Post Office building built in 1933 for $115,000.00 on Washington St.  The renovations where completed in 1980 in the amount of $321,000.00.

In 1997, the Old Athens Post Office was named to the National Register of Historic Places along with many other buildings in the Athens Courthouse Square Commercial Historic District. Today you can still walk past the original 1930s lamp posts, under the original eight-light transoms that hang above the doors, and across the original marble floors to the counter, where you can imagine the many Christmas cards, bills, love letters and packages that passed through the building during its time as the Athens Post Office.

In 1999 the Commission gave the Commission office a face-lift with small renovations and purchasing furniture to accommodate all the Y2K Computer equipment.